Back to shop
Fashion Designer for Game of Thrones 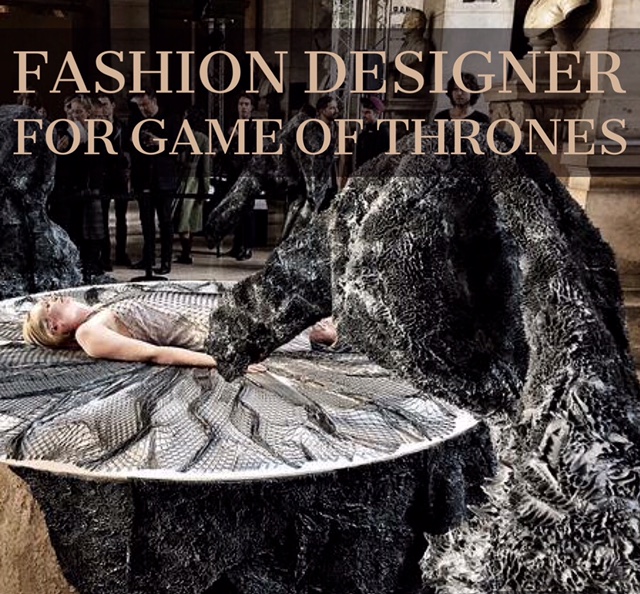 As most of us got into Featured fiction movie Game of Thrones, we turn our eyes to unique outfits of the characters. Who is the designer to the original fictionated historical adaptations that look so genuine. Let’s find out.

Iris van Herpen is a Dutch fashion designer. She studied Fashion Design at Art EZ Institute of the Arts Arnhem and interned at Alexander Mc Queen in London, and Claudy Jongstra in Amsterdam. Van Herpen immediately caught the eye with notable shows.In 2007, she started her own label. Since July 2011, she is a guest member of the prestigious Parisian Chambre Syndicale de la Haute Couture. She participates in many international exhibitions and creates two collections a year. 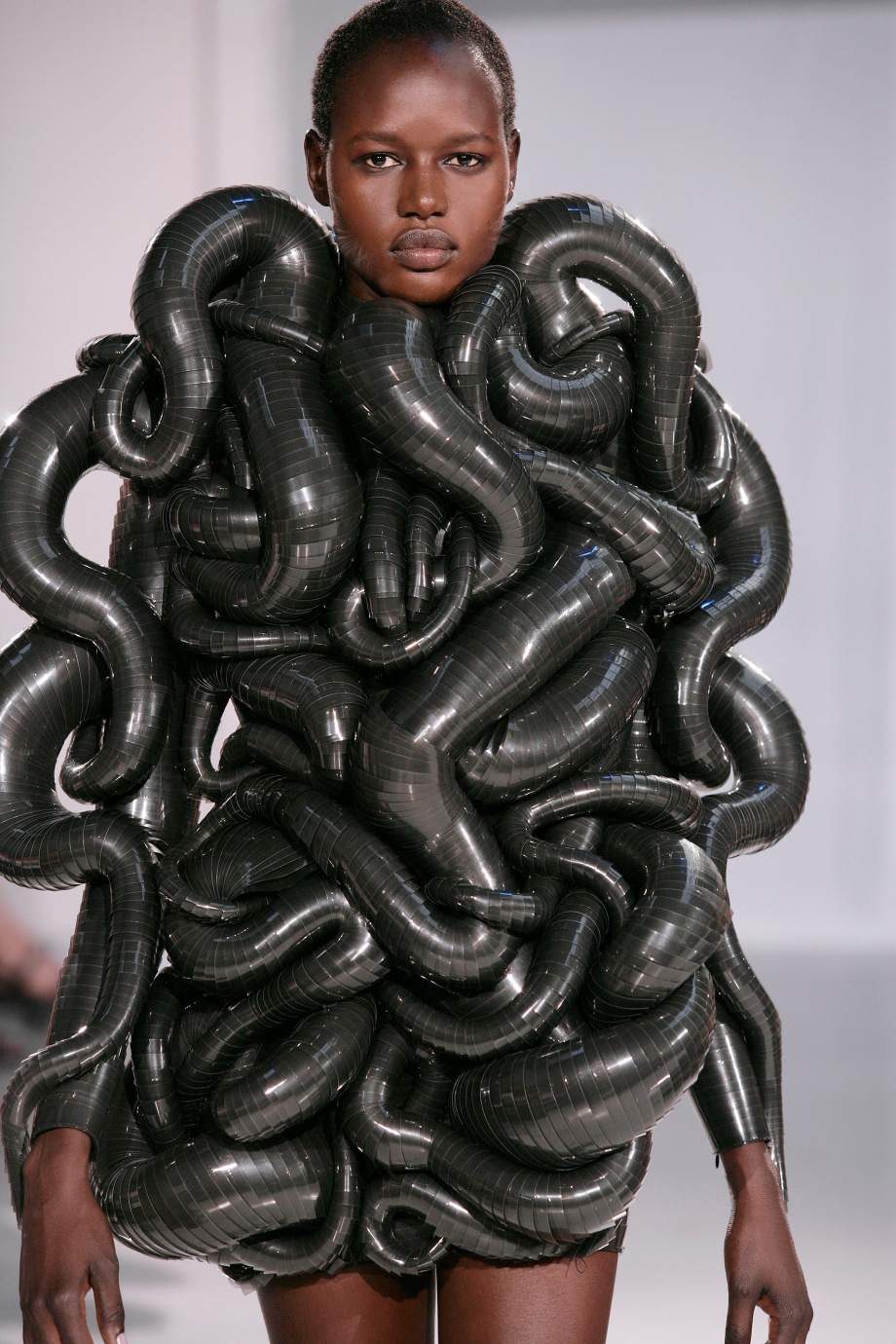 Iris van Herpen had an intuitive appreciation of fashion and art as a youth. Her first passion was actually dancing. It was when she attended the Preparatory Course Art & Design at ArtEZ during her high school years that she became particularly interested in designing clothes.
She graduated in 2006 from the fashion design department of ArtEZ. The department has a strong international reputation and lists notable graduates as Viktor &Rolf. Alexander van Slobbe , and Lucas Ossendrijver (Lanvin Homme). One year after graduating, Van Herpen launched her own fashion label. Iris van Herpen creates women’s wear collections. Her designs require every time a unique treatment of material or the creation of completely new materials. For this reason, Van Herpen prefers interdisciplinary research and collaborations with other artists.

From the beginning of her career Iris vanTaken this into consideration, it is not surprising that ‘sculptural’ is a term much used to describe her work, and, indeed, the designs can function very well on their own as sculptures, as several exhibitions on her work have proven. 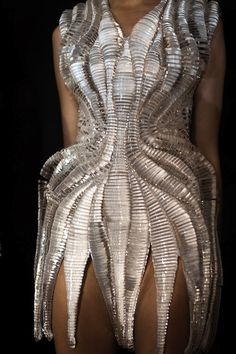 Yet, the designs remain clothes they are not
As an aspiring fashion designer at the art academy, Van Herpen learned to work with soft fabric. She quickly felt limited by fabric, as she wanted to build, construct, and sculpt with the materials of which she created her designs. This forced her, already early on, to experiment with other materials, and later on to develop materials that approached her concept the closest.
Van Herpen’s fashion designs always express an interest in other art forms, and in a general curiosity of the world beyond fashion. Her collaborations during the research and making process are exemplary for this, as are her innovative experiments with materials, techniques, and technologies.
Style
Photographers/Filmmakers:Nick Knight, Inez van Lamsweerde and Vinoodh Matadin, Todd Selby, Joost Vandebrug
Musicians:Beyonce, Bjork, Grimes, Lady Gaga,Joey Yung
Collaborations. 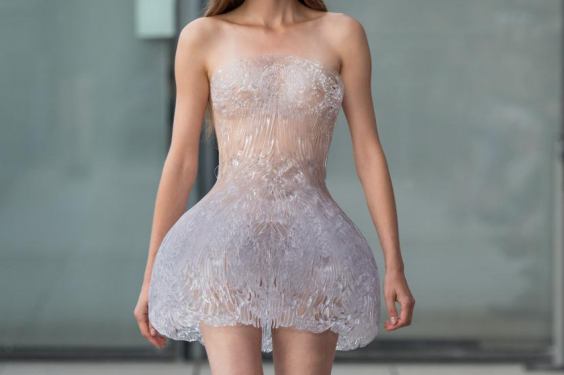 Herpen’s talent has been singled out as very promising and it has grown strong over the years. Her work has been recognized through awards, exhibitions, publications, and her guest membership of the Chambre Syndicale de la Haute Couture.

Wearable sculptures, the design is only realized in equal interaction with the body. Van Herpen’s designs follow, complete, and change the body and the emotions that because there is another essential aspect to be taken into consideration: Van Herpen’s love for the body in movement.accompany it,Van Herpen’s decision to explore the Rapid Prototyping technology of 3D printing allowed her to be the first to introduce this technology when simultaneously the body adapts and adopts the new forms. 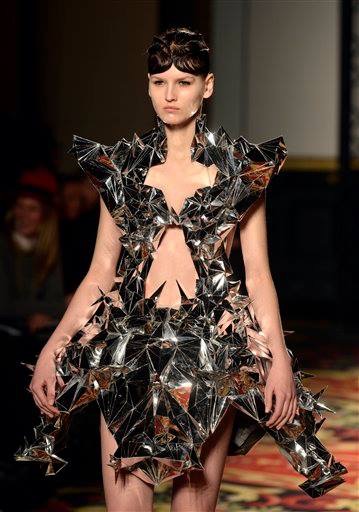 Movement is key. It is of decisive importance for the ultimate design how a moving body reacts on a piece of clothing and, vice versa, how a piece of clothing behaves when worn. Van Herpen became fascinated with the endless design potential of 3D printing. In recent collections, she further developed her prints by adding detailed handwork.

The 3D prints only added to that other much-heard term to describe Van Herpen’s style: futuristic. Besides the use of new technologies, the term mostly refers to the appearance of her looks. What is very important to realize, though, is that her designs combine new technologies and diligent handwork. In fact, this is characteristic for all Van Herpen’s collections.
Exactly this combination of handwork and innovative technologies brings Van Herpen to her edgy designs. She equally values techniques from the past and techniques and technologies of the future, because they have their own power and beauty that, when rightly combined, can be enhanced instead of being substituted by one another. 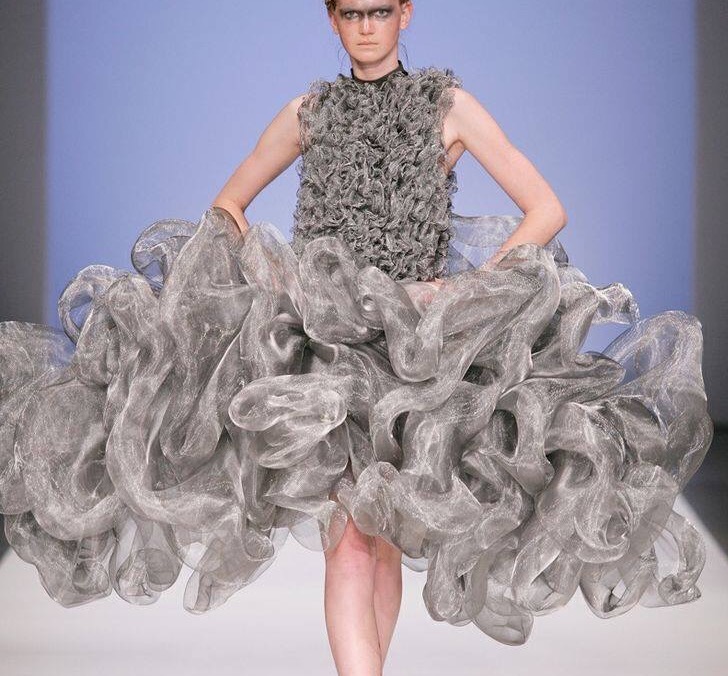 Collections
HACKING INFINITY – Womenswear F/W 2015-16
With Hacking Infinity Iris van Herpen explores the idea of terraforming: modifying the biosphere of another planet to resemble that of Earth. The collection explores the possibility of new geographies and our place within them. The desire to reconfigure space finds expression in light performative materials, biomimetic structures and saturated spectral colors that interact with the movement of the body.

The central geometry is the circle, in both silhouette and cut. The spherical shape of planetary bodies and the symbol of a boundless ‘hackable’ infinity unfolds before us in a constant flow of mandala-like forms. Van Herpen developed an extremely light, translucent stainless steel weave, hand burnished to imprint a sheen of nebula-like colors, whose infinite variations make each garment unique. 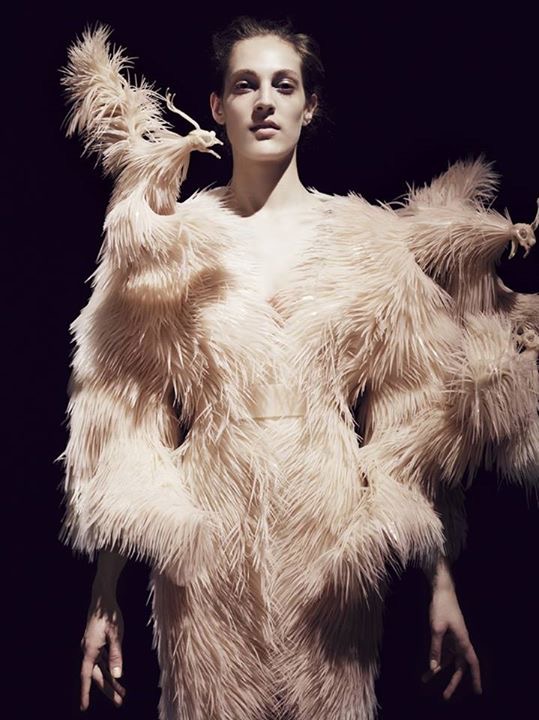 Three-dimensionality is imperative to Van Herpen, and she continues her research with the creation of a 3D-handwoven textile with designer Aleksandra Gaca. One weave like a mineral geology encases the body while the other cushions it with a light linear grid, threaded and fringed with a raw edge.

Van Herpen pursues her collaboration with the Canadian professor of architecture Philip Beesley on the creation of digitally fabricated dresses made from a black garden of fractal-like geometries. The shoes for this collection were made in collaboration with the Japanese shoe designer Noritaka Tatehana.They are crafted from 3D-printed translucent crystal clusters and laser-cut leather.
MAGNETIC MOTION - S/S 2015, Womenswear
In this ready-to-wear collection Iris van Herpen explores the interplay of magnetic forces. Her visit to the Large Hadron Collider in CERN provided inspiration to explore the representation of dynamic forces of attraction and repulsion. “I find beauty in the continual shaping of chaos which clearly embodies the primordial power of nature’s performance,” says Van Herpen describing the essence of the collection.

She brought together Philip Beesley’s pioneering work in responsive ‘living’ sculptures and artist and craftsman Jolan van der Wiel, whose work with magnetic tension has resulted in dynamic sculptures and installations that bring to mind the power of volcanic eruptions. Both artists strive to erase the boundaries between nature and technology in their work, which coincides with the direction of van Herpen’s creative aim. 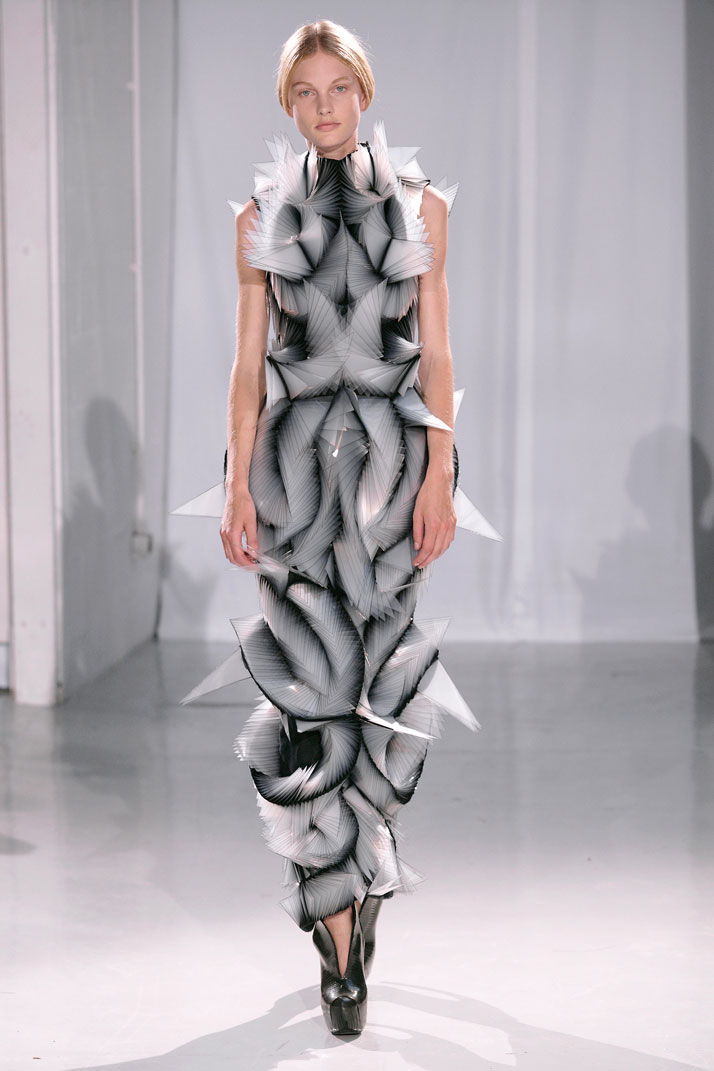 Van Herpen worked with techniques like injection molding and laser cutting on maze-like structures, 3D-printing and intricate architectural handwork on dresses, jackets, trousers, skirts and blouses giving them dynamic shapes and surfaces that echo the body’s movement. The three-dimensional nature and the layering of the garments give them volume.

The controlled structure of the clothes is countered by the chaotic structure of the accessories, where, due to the nature of magnetic growth, no two items are alike. The shoes, belts, necklaces, and clutches were “grown” using magnetic fields.
BIOPIRACY - Womenswear
A mix of ready-to-wear and couture pieces is presented with artist Lawrence Malstaf -who specializes in the interaction between biology and physicality.
Models float in the air, embryonic, seemingly weightless and in a meditative suspended animation. They came into being through the intriguing question, preceding this collection, on the purchase of patents of our genes in the recent past: Are we still the sole proprietors of our bodies?

From this question arises a sense of arrested freedom in one's most intimate, solitary state. Metamorphosis is suggested through intricate enmeshing of materials. Imprisoned fire opal beads gleam through lacerated weaves; artificial fibers compose voluminous, architectural structures, like the organic ripple of light on water.

A 3D-printing collaboration with Julia Koerner fuses the artisanal with the technical to create a kinetic dress which dances as it amplifies bodily movement. Molded boots in collaboration with United Nude accelerate and reconfigure the silhouette. 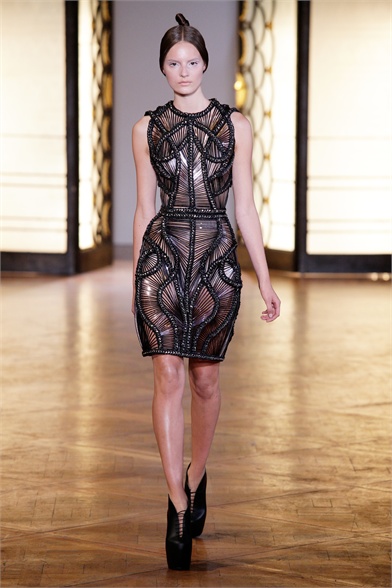 EMBOSSED SOUNDS – Womenswear
Fascinated by the relationship and potential porosity between the senses, Iris Van Herpen has developed clothes that generate sounds by touch. ‘Embossed Sounds’ is the name of her orchestra of human touch, which explores garments as electronic instruments that one can touch and play. By touching the clothes, music is sculpted live by the models for their audience in an intimate performance.
Touch sensitive and sensual audio waves threading and weaving over the body create an intricate sonic web. The collection plays on a visual duality and ambiguity, combining the ethereal feminine softness of plissé with the flick knife and swagger of the underground rebel biker.

With architect Isaie Bloch and Materialise she continues to develop 3D-printed dresses, which she was the first to present in both static and flexible forms. Her partnership with United Nude's Rem D. Koolhaas and Stratasys has led to shoes like tangled webs of tree-roots around the foot. 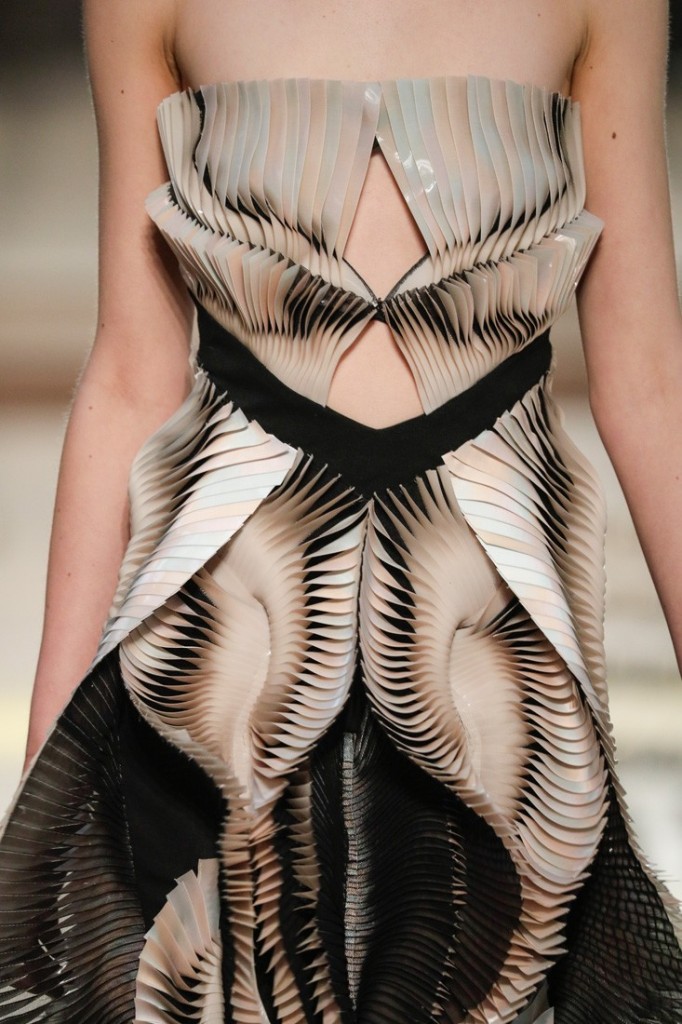 VOLTAGE - 2013, Paris Haute Couture Week
For her fourth collection as a guest member of the Chambre Syndicale de la Haute Couture, Iris van Herpen explores the electricity of the body. Experimenting with its use in the field of creation, this collection seeks to portray its tangible movement and power. This ability of light and electricity to change states and bodies is reproduced using the most innovative technologies. Described as an alchemist approach to fashion, Van Herpen’s designs perpetually embrace new collaborations with artists, architects and researchers.

As part of the show she collaborated with new Zealand artist Carlos Van Camp, echoing his notion of controlling high voltage electricity and its interaction with the human body. Van Camp experiments with three million volts running through bodies. Van Herpen’s ongoing collaboration with architect Philip Beesley’s focuses in this collection specifically on how the reaction of chemistry and electricity causes structures to respond to their environment and react as living beings.